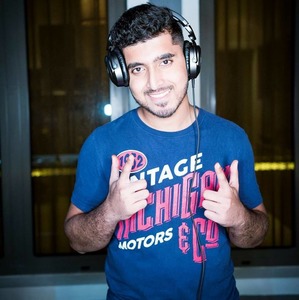 Age can be a wonderfully cruel thing. At 19, DJ RuffDub is 2 years too young to play in Dubai’s clubs and bars, but he’s more than old enough – and talented enough - to have already made a name for him in the super competitive Bollywood scene.

A versatile DJ able to turn from deep and future house to Trap, Dubstep, 80s and 90s classics and Bollywood, his first taste of the big time was playing a private party for the Middle East’s biggest fashion retailer Splash!, with guests Sunny Leone and Javed Jaffery seen nodding their heads to his beats. That set was quickly followed by another private booking in Dubai where he played alongside Bollywood royalty Bombay Rockers.

Not yet 20, but already a DJ for a quarter of his life having started his dance music love affair in 2012, RuffDub hails from Bangalore and calls Dubai home, where – when he turns the club ready age of 21 – he has a number of residencies already lined up.

A millennial DJ, he’s up to speed with his online presence: his Electromania radio show on HITS101 in California built up a devoted following, opening doors for up-and-coming DXB DJs, while his Youtube channel includes searingly honest DJ vlogs as well as footage of several impressive live performances. Inspired by the energy and passion of Skrillex, RuffDub is set to release his debut productions later in the year, while he’s also looking to branch out into his own set of events including his own yacht party. With big ambitions and DJ skills to match getting him noticed by the local DJ community, RuffDub has already proved that age is just a number.