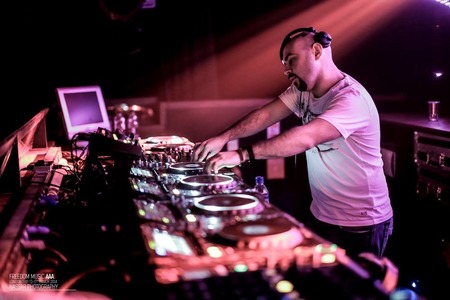 Known as AVIDBOLD, Ahmad Hijjawi’s love of music is the reason for his need to play music that can be heard and appreciated by many while improving the music scene in Amman. His passion for it has been the driving force behind his place in the world of sound and melody. Born in Dubai in 1985, he felt a pull towards music from an early age where he grew up watching his brother, DJ Bee Bee create music, and has been following his calling ever since.

Self-taught, AVIDBOLD is influenced by the legendary Sasha, and his brother DJ Bee Bee, who was one of a few to spread Electronic Music throughout the Middle East. To continue to follow his passion, he took a more involved step in the music production world by studying Electronic Music Production in 2008. In 2011, he continued his studies and received a Bachelors of Art in Audio Engineering.

Starting his DJ career in 2007, he was booked regionally in clubs performing with many great names, such as John Digweed, Danny Howells, Heidi, Bedouin, Satoshi Tomiie, Hernan Cattaneo, M.A.N.D.Y., Damian Lazarus, and many more, as well as participating in events and festivals, such as Sandbox Festival, Distant Heat, Creamfields and so on.

In 2016 - 2018 AVIDBOLD was the resident DJ for CLSTR, a pop-up club that took Amman to the next level by introducing proper underground electronic music to Jordan.

At the end of 2018, he began a new journey in Dubai, UAE where he became the resident DJ of Skorpeus club and Villamore beach club. His aim is to reach a wider audience with his sound.

He believes all people can be united in love and peace through the world of music. His passion for spreading good vibes across the world has now become part of who he is and his reason for being.